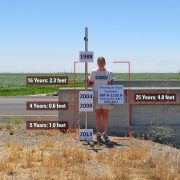 You can’t see them. You can’t swim in them. But groundwater aquifers are one of the most important sources of water in the North Coast. Aquifers are water-rich underground areas. They aren’t like lakes or pools but are composed of water-filled areas between rocks, sands, and gravels.

Plants and animals benefit from groundwater when it’s near the surface, and feeds creeks and streams. Humans tap into aquifers through wells used for drinking, irrigating crops and operating businesses. People who live in rural areas rely almost exclusively on groundwater, and while cities in Sonoma and Mendocino counties get most of their water from the Russian River, groundwater provides a critical back-up source that is used during droughts or in emergencies.

In some parts of California, like the Central Valley, aquifers are large, continuous and relatively close to the Earth’s surface.  But aquifers in coastal counties are much more complex. Separated by mountains, hills and geologic features, including earthquake faults, there are 14 identified groundwater basins in Sonoma County and six basins in Mendocino County. This geologic complexity explains why one landowner can have a productive 50-foot deep well, while their neighbor’s 200-foot deep well provides only a trickle of water.

Studies conducted by the US Geological Survey (USGS) found that water in some of the deeper local aquifers has been underground for more than 20,000 years while water levels in aquifers closer to the surface can fluctuate seasonally, dropping during the summer when pumping is heavier and increasing during the rainy season.

Unfortunately, too many wells, too much pumping, and droughts can temporarily – and in some cases permanently – impact aquifers, resulting in dry wells, poor water quality, depleted creeks, and in some cases sinking of the land surface. In areas close to the ocean and bays (like Southern Sonoma Valley), the loss of groundwater can result in salt water migrating into groundwater basins. Some communities in the Central Valley where groundwater has been over-pumped have seen the land surface drop by 30 feet, damaging roads, canals and bridges. Declining groundwater levels and polluted run-off from past agricultural practices have also degraded water quality in several Central Valley communities, resulting in residents having to use bottled water for drinking and bathing.

These problems were the motivation for the Sustainable Groundwater Management Act (SGMA), which became California law in 2015.  To make sure that people fairly share and wisely use and protect this shared resource, SGMA requires communities to manage groundwater by, first, creating new Groundwater Sustainability Agencies (GSAs). In Sonoma and Mendocino counties, GSAs were created for the Santa Rosa Plain and Petaluma, Sonoma and Ukiah valleys.

The second step of SGMA is to gain a scientific, quantifiable understanding of current and future problems, and to develop solutions through the creation of a Groundwater Sustainability Plan (GSP).  The third step of SGMA is to implement the GSP and obtain sustainable conditions over a 20-year time period, with check-ins every five years. If local communities fail in taking any one these steps, the state can take over management of the basin. So far, local GSAs are on track and are working on the GSPs.

SGMA requires that the GSPs be developed through a transparent process with public input and community engagement. The GSAs all hold regularly scheduled public meetings, and materials are available for review.

How local well owners will be affected by SGMA will depend on the problems (and solutions) identified in the GSPs. One thing is certain:  SGMA prohibits the GSAs from requiring residential groundwater users to install meters on their wells. In regard to costs, if aquifers are healthy and there are minimal concerns about future impacts, the GSP could simply require ongoing monitoring and reporting of groundwater levels through test wells and voluntary programs. If problems are identified, the GSP could identify potentially more costly programs (like water conservation) or projects (like recharging the aquifers) to ensure that groundwater is sustainable. In some areas with severe problems, the GSA may be required to limit groundwater use.

Locally, the four GSAs each received a grant of one million dollars to help prepare the GSPs. If more funding is needed, SGMA allows groundwater users to be charged for the costs of running the GSA and developing and implementing the GSP. The Santa Rosa Plain GSA (encompassing the general valley floor area from Cotati to Windsor and from the foot of Sonoma Mountain to Sebastopol) is currently looking at a possible groundwater sustainability fee to cover costs (up to $13 a year for rural residential well owners and up to $26 per acre-foot for other groundwater users). The Santa Rosa Plain GSA will be holding a series of community meetings on March 4, 6 and 7. For more information on the Santa Rosa Plain fee, go to www.santarosaplaingroundwater.org/finances/fee.

This article was authored by Ann DuBay, Sonoma County Water Agency, on behalf of RRWA. RRWA (www.rrwatershed.org) is an association of local public agencies in the Russian River Watershed that have come together to coordinate regional programs for clean water, habitat restoration, and watershed enhancement.