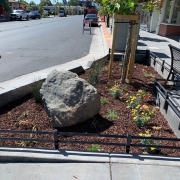 Ukiah, the city I work in, recently renovated the entire downtown area with new sidewalks, paved road, and all new trees with planter areas. In full transparency, I was involved in aspects of the planning of this project but not the design. When a co-worker of mine made a criticism regarding the new planters at all the street corners, I was excited to actually have some rare insight that I felt was useful in a nerdy sort of way. He complained that the contractor left the planter areas several inches too shallow and made an opening in the curb which will likely flood and dump garbage and dirty water around the new plants just put in. “Exactly the point!” was my response which only made him more confused, and as I presume, makes him not the only one. Let me geek out with you in a science meets nature sort of way.

Most cities and developers are required to reduce storm water pollution to our local waterways as well as promote groundwater recharge. This is all part of the program you may have heard about called Low Impact Development or LID. To accomplish this, many creative designs are integrated into major roadway projects and new developments such as the already mentioned bioretention planters or bioswales. Bioretention planters are contained areas with walled vertical sides such as a sidewalk curb. These areas are typically a few feet deep with a thick filtration fabric surrounding the walled sides and a natural bottom which keeps water that enters the planter from travelling under adjacent roads or sidewalks but rather goes straight down to recharge the earth. The planter will then be filled with a specialized bioretention soil up to a level just below the gutter height to allow water to enter the area which makes the top of the soil typically 6-8” below the adjacent sidewalk. The design will carefully select a wide variety of plants for these bioretention areas that will stabilize the soil, remove pollutants through physical, biological, and chemical processes, and look aesthetically pleasing especially when surrounded by so much hardscape. These features can even have a positive impact for birds, butterflies, and bees by providing additional habitat and pollinator friendly plants. Stormwater is typically directed to the surface of the bioretention, and pollutants are filtered out as the runoff percolates vertically through the amended soil section. The plants help keep the amended soil section biologically active and help absorb and grab various pollutants before reaching the storm drain system or nearby waterbodies.

During heavy rains, some bioretention planters have a storm drainpipe installed in them with an inlet just above the soil level that will capture excess water that is unable to infiltrate into the soil so it doesn’t flood. The water that has entered or traveled through these bioretention planters has now been significantly cleaned and filtered to remove pollutants, trash and leaves and will keep them from entering or clogging up the storm drains which lead directly to your local creeks and lakes.

Planters can be installed nearly anywhere in the right-of-way, including in the sidewalk, in medians and pedestrian boulevards, or along the property line of residents or businesses. Although there are many new devices people much smarter than myself have invented that filter stormwater, the natural solution of having plants and soil filter the pollutants has typically come out on top as the most efficient. So, if you ever have the opportunity to observe a bioretention planter in the sidewalk and want to flex your knowledge to your friend who thinks it’s just a regular planter, go ahead and geek out.

This article was authored by Andrew Stricklin, Associate Engineer, City of Ukiah Public Works, on behalf of RRWA. RRWA is an association of local public agencies in the Russian River Watershed that have come together to coordinate regional programs for clean water, habitat restoration, and watershed enhancement.